To increase the crude processing capacity currently installed, Repsol YPF undertook the C-10 project for the Extension of the Cartagena Refinery which includes, among other actions, the construction of new storage and processing facilities, and related works; both on newly developed land surrounding the existing facilities, as well as in several areas available within the current refinery, and in related storage and transport areas, which are understood as an integral part thereof.

It is the largest industrial investment in the history of Spain.

Cartagena's new industrial complex is already a world benchmark for environmental sustainability. A new cogeneration plant is combined with the waste-water and sulphur recovery plants, which far exceed the highest environmental requirements. Overall, in each ton processed, emissions of nitrogen oxides (NOx, -64%), sulphur dioxide (SO2, -68%) and particles (-80%) are reduced.

Cartagena has gone from being an obsolete plant with no future to become one of the best in Europe. Technology is the key: the most advanced treatment of raw materials, process safety and energy saving have turned the company into a technological reference for our competitors.

During the construction of the new units, up to 500 national companies employing about 20,000 people participated. As a result, an extensive network of leading companies capable of competing with the best ones in the international market was developed. In addition, the best engineering companies in the world were hired for the definition and execution of the project.

Such actions include PACADAR's involvement in the execution of precast structures within the industrial complex.

PACADAR, as a long-standing company in the manufacture of precast concrete elements and always at the forefront of the technical development of precast structures, spurred improvements both with regards to the technical aspects and in the execution of works as compared with the traditional execution of this kind of structures, and is currently the most highly reputable company in industrial precast engineering in the domestic market.

PACADAR has collaborated -and continues to be in contact with - large engineering and energy sector companies to ensure that the projects being implemented are sustainable in terms of economic and execution factors.

In the C-10 project PACADAR successfully executed the pipe-racks, the cooling tower and the electrical substations.

The pipe racks executed by PACADAR are precast concrete structures which are used as support racks for the pipes carrying various gases and liquids. They are used in industries in general to have air, water, steam, fuel, and all kind of liquids and even meltable solids transported and pumped. These are rather slender structures made up of column and girder grids at different heights and arranged in columns and rows of cross bracing, due to the heavy loads they bear (gravity, wind and seismic forces).

PACADAR carried out the engineering and construction works to build this on-site civil engineering project and the prefabricated building of the Cooling Tower no. 7 (U-437) at the REPSOL-YPF Refinery in Cartagena (Murcia, Spain), in Block 3B of the Project C-10. The tower consists of 5 cells, each of them measuring 12,00 x 10,00 m, and is provided with a Cleanflow fill.

PACADAR executed the two main electrical substations in the industrial complex. Electrical Substations are used to increase the voltage of electrical power produced in the generators of any power plant, whatever their type. These are industrial buildings that have vulnerable areas that must be protected and that require a certain monolithic image reached through precast structures. 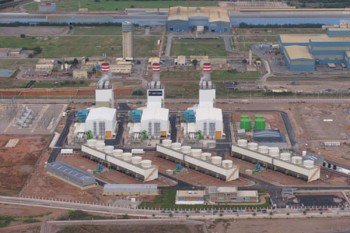 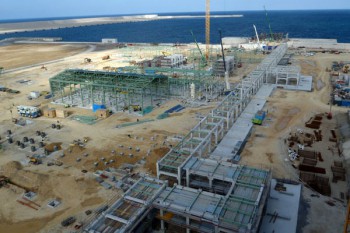 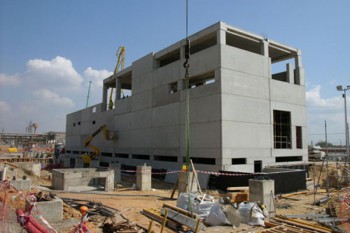